For just about 4,000 years now, people have been trying to understand cats. Why, so many cat owners have wondered, does my kitten stare at the ceiling and meow for fifteen minutes straight? Why does she prefer to play with a half-eaten sock over a very fancy — very expensive — catnip-filled ball?

One man from Indiana was particularly puzzled when his newly adopted cat made a strange decision: she bolted out of the house and never looked back. He held out hope that he’d see his cat again, but as days turned to years, he started to wonder if it was all just a pipe dream…

Jon Gulla was craving both responsibility and love one day in 2012, so he followed in the footsteps of so many young adults before him and went searching for the perfect pet.

When he saw two cats — Julie and her brother, Jack — Jon knew he’d found the perfect pair. He brought the two home and let ’em run hog wild around his place. The kittens cuddled together. They played together. They were a delight.

This made it particularly painful when, shortly after the adoption, Jon had to leave Julie and Jack with his mother. He was off to college and wasn’t into the idea of hiding cats in his dorm room.

Jon’s mother, Lorinda, welcomed the kittens into her abode because, c’mon, who wouldn’t? Julie had a little white spot on her fur that made her just so darn cute. But her joy in living with the two kittens was unexpectedly cut short.

Being that she was a cat and prone to bizarre fits of panic, Julie took off running one day. Just scooted out the door and headed down the street. “I couldn’t find her,” Lorinda recalled. “I was just beside myself.”

Devastated by the breakup of his dynamic kitten duo, Jon teamed up with his mom to find the missing feline. They wandered the neighborhood, hanging up posters, jingling bags of cat treats, and calling Julie!

Frantic searches for the cat halted, however, when doctors diagnosed Jon with lymphoma. With a fight for his life now ahead of him, he could no longer focus on the cat he so dearly loved.

Six years passed. Jon beat cancer, married his long-time girlfriend, found a new job, and set-up shop in Indianapolis, 25 miles away from his old home in Carmel. Things were looking up. But he never stopped thinking about Julie.

Perhaps it was for that reason his mother was browsing PawBoost Lost & Found Pets, a page on Facebook dedicated to reuniting pet owners with, well, their lost pets. A certain post on it piqued her interest.

A woman named Christine McKeon wrote that she’d recently seen a cat under a shed in her backyard. The cat, she noted, was skittish, and just a little bit mean. It didn’t sound anything like Julie.

Most concerning of all was that the post didn’t mention the white spot on Julie’s belly, which would’ve been a good detail to include, Lorinda thought, were someone trying to find this cat’s owner.

Still, even after six years, she, like Jon, was drawn to the idea that Julie was definitely still out there, looking for thwm. She knew they’d be kicking themselves for the rest of their lives if they didn’t follow up with Christine.

So Jon made the drive, white-knuckle clenching the steering wheel in anticipation. In less than half-an-hour, he arrived at Christine’s house and stood before the shed a mean, stray, black cat called home.

With every ounce of love he could muster, just as he and his mother had done six years before in the streets of suburbia, Jon called Julie’s name. And nothing happened.

But understanding that cats are cats and don’t really come when you call them, Jon gave it another go. Julieeeee, he called. Julieeee. Then, two glowing eyes peaked out at Jon from the darkness beneath the shed.

Jon in her sights, the cat once called mean and skittish emerged. “She came out running from under the shed,” Christine recalled, “like ‘Oh hey, I know this guy.” Soon, she was face-to-face with Jon.

And then she started purring like a lawnmower engine! She rubbed against Jon’s legs, and, after he bent down to pick her up, she crawled right up on to his shoulders! Still, Jon needed to be convinced this was his Julie.

“I turned her around…and I said ‘does she have a white spot?’” Jon explained. The folks gathered around confirmed: “She has a white spot on her stomach!” Jon couldn’t believe it. After six years, he finally found his cat!

In that moment of reunion, Jon pet Julie and noticed her fur was surprisingly well-kept. To him, it meant that she only recently moved in under the shed. Someone had been taking care of her over the years.

Delighted to have his cat back, Jon looked forward to another reunion — Julie and Jack’s. Would the siblings even remember the short time they spent together? Would they get along?

All of Jon’s anxieties melted away, however, when he put Julie down beside Jack for the first time. The two went right back to their old tricks, running around and playing together. Jon was overwhelmed.

“It’s almost like seeing a ghost or something,” he said of seeing Julie in his home. Still, this was one ghost Jon was happy to have haunt his house!

Jon couldn’t help but be thankful to whoever cared for Julie over those six years. There wasn’t a chance in the world she would’ve made it on her own over that time. Oddly, though, some animals do prove surprisingly self-sufficient on their own.

In November of 2018, for instance, when one of the most destructive wildfires in California history ripped through the Golden State, people were forced to make tough choices. Animals were, too.

For Andrea Gaylord, the decision to abandon the home that had been in her family for ten generations was one of the hardest she’d ever made. But even as she watched as the century-old home went up in flames, something else made her heart ache more.

As the Camp Fire made its way through Paradise, Andrea’s guard dogs, Madison and Miguel, had taken off and vanished without a trace. Though she and her husband had searched tirelessly for their beloved pets, the encroaching blaze forced the couple to flee, leaving the fate of the dogs unknown.

Andrea and her husband fled to a nearby shelter, where, alongside hundreds of other evacuees, they waited for the fire to be extinguished. All the while, thoughts of Madison and Miguel never left her mind.

Finally, after 17 days of non-stop firefighting, the raging Camp Fire blaze was contained. Like her fellow Paradise residents, Andrea was eager to return home, hoping somehow her dogs had survived. But when she and her husband attempted to leave the shelter, they were told that Paradise was still too unsafe to return to.

That’s when she contacted Shayla Sullivan of K9 Paw Print Rescue, who had actively been rescuing lost pets from areas affected by the Camp Fire. After learning of the situation, Shayla vowed to do whatever she could to reunite Andrea with Madison and Miguel.

However, as soon as Shayla began her search, she received word of a dog matching Madison’s and Miguel’s descriptions wandering through the small city of Citrus Heights near Sacramento. The city was 85 miles south of Paradise.

Shayla drove down there, and when she arrived, she was stunned to find the dog described to her was, in fact, Miguel! Unbelievably, the dog had traveled from Andrea’s home in Paradise and had been picked up by another local rescue organization.

Andrea was overjoyed when she heard the news about Miguel, but Shayla wasn’t satisfied with finding just one of the two pooches. And so, loading up her car once more, Shayla headed for Paradise.

The roads were barely navigable as Shayla made her way through the once-vibrant town, a graveyard of charred homes and vehicles peering out at her from beneath the ashes of burnt treetops. Forget dogs for a second: with so much destruction, was it possible anything could’ve survived out here?

Upon reaching Andrea’s burned-down property, however, Shayla got her answer. As she surveyed the scorched earth, Shayla noticed movement in the pile of rubble that was once the hundred-year-old home. She approached, her heart beating wildly…

It was Madison! Apparently, the faithful guard dog had returned after the fire had been extinguished and was now sitting watch of his former home! But even with the dog alive and well, there was still one challenge that Shayla would have to face.

Being that Madison was no lover of strangers, the wary dog immediately took off when Shayla approached him (some guard dog!). Shayla knew, if she wasn’t able to catch Madison, the dog would surely perish from a lack of food and water. Shayla needed a plan.

So after leaving some fresh water and a bowl of food out for Madison, Shayla returned to Andrea to share the good news and relay her difficulty in catching him. The pair was stumped over the predicament but devised the perfect method for luring the protective pup back home.

Using an article of Andrea’s clothing, Shayla used the smell to calm Madison and draw her back to the property. And when the guard dog returned, he found his owners and brother waiting there for him!

The tearful reunion was marked by excited licks and yelps from Madison, who was then fed a hefty bag of his favorite treat — Wheat Thins. Even in the face of catastrophe, Madison stayed loyal to his family and protected the home at all costs.

In all the destruction, this loyalty was not lost on Andrea. “You are the best dog,” she told Madison through joyful tears. “The best.” 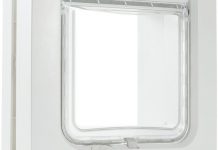 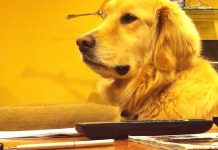 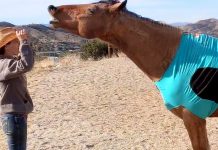