It’s really sad how many strays get hurt by heartless humans every single day. As if being left to fend for themselves isn’t hard enough, these poor souls are treated with disrespect and not many of them get the help needed in order to start a new life around humans who care. Luckily, the story of an abandoned dog named Gus got a happy ending after a woman named Laura Jean shared his photos on Facebook and asked kind-hearted people to lend him a helping hand.

According to Houston news outlet KHOU11, Gus was living near some abandoned buildings for around 12 months.

Laura knew she couldn’t get to Gus by herself, so she turned to the Facebook community hoping someone would be willing to step in. She posted:

“SOS!!! Dead dog walking he wouldn’t come to me and I was only pushing him into traffic. Thanks to all the cars who didn’t stop who could’ve helped me get him to safety.”

Further, she asked those who had time to help to contact her, because the dog was in a bad shape and she wasn’t sure how much longer he could survive all alone.

“He was last seen going into an apartment complex and I gave my info to some residents. One said he is usually around but in the back. I was unable to find him. If anyone can dedicate some time to look for him, please let me know. This dog will need foster, rescue and lots of pledges if he is found again. Southeast Houston – 77048”

Her plea resulted with a positive outcome. Generous people were ready to locate Gus and provide him with the much needed medical assistance.

The real life heroes who got out and started looking for the dog were Rob Acuña and his partner Tom. They were sure it would take days before they track Gus down, but not in one moment did they want to quit the search. Luckily, they spotted the scared animal the same day. He was staying in one of the buildings and they recall how they almost missed him.

“We were about to walk right past it, then noticed the opening and looked inside with a flashlight. After a few seconds, we commented about how badly it reeked in there. We were about to go in to look in a room that’s inside when the dog came strolling out.”

Now that Gus was in the rescuers’ hands, they could see just how injured this sweet creature was.

Gus’ condition was more severe than anyone assumed. Some cruel person tied a shoelace around his neck so tight that it was embedded into his skin around the throat. This resulted in serious wounds and damage to his trachea. The X-rays also showed how he was shot with a pellet gun more than 25 times.

Luckily for Gus, those around him were determined to give him a second chance for a better life. K-911 gave generous donation that was used for Gus’ surgical procedure. After they consulted a soft-tissue specialist, Gus underwent a surgery on Friday, August 31st. The doctor from Texas A&M’s animal hospital did magic on this amazingly lovable dog and the results are incredible.

The scarring was removed and Gus looked normal again. The size of his head got back to normal and he was now in a home with a foster mom who volunteered at the clinic where he was treated. Marina Harrison is the lady who opened the doors of her home for Gus. As his treatments will be ongoing, he would be staying with this lady until he finds a forever home.

A bit of affection and willingness to offer kindness by all those people involved in Gus’ rescue made him resemble a totally new dog. He’s way healthier and much happier. His followers and K-911 are still offering financial support for him.

To his surprise, he had some visitors recently. Laura, who shared his photos, and Rob and Tom, who tracked him down, stopped by to check on him and treat him with a bunch of belly rubs and kisses.

Take a look at the video below to see Gus and how much his life changed. He’s forever grateful for being given a new lease on life. 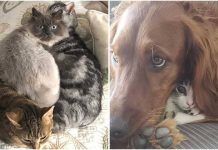