It’s always funny seeing the ways dogs interact with other dogs. Just like people, dogs are social creatures and make friends with one other, although sometimes they have funny ways of showing affection.

Ruby, a Germany shorthaired pointer, goes to doggie day care with her brother Miles. A woman named Alanah Lorraine takes her own dog there… and over time began to notice Ruby had a very interesting habit:

She always pets the other dogs!

“She does it every time she is in,” Alanah told The Dodo. “We think she wants attention!”

She noticed that the other dogs aren’t bothered by Ruby’s unusual greeting.

“Most dogs aren’t bothered by it and just let it happen,” Alanah said.

Alanah got some footage of Ruby’s hilarious habit and made a compilation, which she posted to TikTok… fittingly set to the song “You’ve Got a Friend in Me.”

♬ You’ve Got a Friend In Me – Cavetown

The video went viral on the site, and was reposted by the popular Twitter account We Rate Dogs.

“I thought it would be adorable,” Alanah told The Dodo. “I never imagined it would go viral.”

If Ruby was petting the dogs for attention, she certainly has it now!

What a funny dog! It’s a cute video to brighten your day! Share this story! 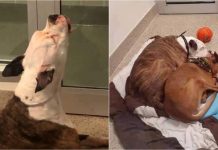