When you think about it, there are no other animals that bond better with people than dogs. These noble creatures have proved their love and loyalty to humans throughout the years and they are still man’s best friend. Their intelligence makes them suitable to be service pets who assist people with certain disabilities. They are also used as therapy dogs who helped many individuals turn their life tor the better.

TT is an eight-year-old German Shepherd who works with a disabled veteran suffering from PTSD. This dog is the sweetest dog ever, but recently she went through an ordeal that left her with a broken tail and a broken heart.

TT was brought at the Groomingdales Pet Spa in Satellite Beach where she was supposed to get a grooming treatment. Sadly, she ended up being beaten and treated with disrespect. The reason why the 37-year-old employee named James Cordell Doughty Suthann did this gruesome act was because the dog wouldn’t stand still. The good thing is that this awful man was given the ax and was arrested on a felony animal cruelty charge.

The incident was caught on the store’s surveillance camera where Suthann could be clearly seen holding TT’s head violently, after which he grabbed her by the tail and lifted her off the ground. The poor animal’s tail broke and had to be amputated as the doctors couldn’t do anything because of the severity of the injury. The cruelty continued by Suthann hitting the dog with the bathing hose on the head.

“The video is so graphic that I will not post it on Facebook, but trust me when I tell you that it is one of the most difficult things I have ever had to watch in my 39 years of Law Enforcement because of the horrific and cruel way the pet was treated,” Sherrif Wayne Ivey of the Brevard County Sheriff’s Office wrote on Facebook.

TT is now trying to recover from that traumatic experience she went through.

“Unfortunately, the maximum bond that could be placed on Suthann was $2,000.00, because they don’t let me personally set the bond amounts for criminals like this guy!!” Sheriff Ivey wrote.

The salon’s owners didn’t know what kind of person Suthann was. They were also very disturbed after they’ve seen the surveillance camera footage.

We really can’t understand how someone can be so cruel with such loving animals. We hope TT would be able to leave this terrible experience behind and continue to be the best at her job. 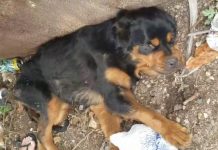 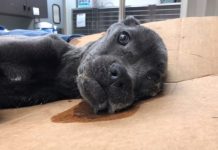 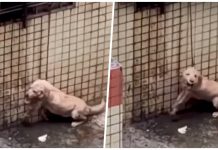 Puppy tied with a short rope for making an innocent mistake 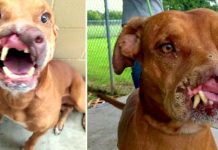 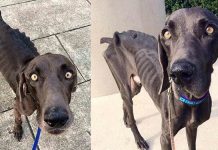 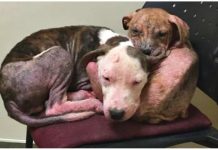 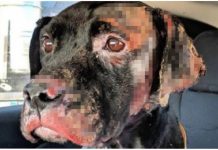 Dog Severely Burned In Fire Is Dumped At Shelter, But Firefighter Saves The Day 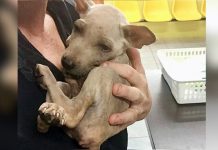 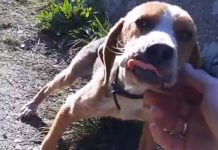