If you had read our previous posts, I think that you know Merlin, the Canadian Ragdoll cat who became famous for his permanent angry face. That is why we would like to introduce another feline Merlin (Merlin Griffith) has become quite the internet sensation – but his face is nothing short of angelic.

While Merlin in Canadian has blue eyes and furrowed brows, Merlin Griffith has milky bluish eyes and luxurious dark gray fur. His parents are Nathanial Green and Elliot Green, two visual artists that managed a visually stunning Instagram page dedicated to their beautiful pet, which has more than 30 thousand followers.

Elliot and Nathanial met Merlin in 2017 when they visited the Lynchburg Humane Society (in Lynchburg, Virginia) on “Free Cat Friday” event. They had always wanted to adopt a Siamese kitten and were hoping to find one that day. Unluckily, all of Siamese were all either on hold or already adopted.

Not to be discouraged the couple continued their search and they couldn’t be happier that they found Merlin. The little boy was brought to the shelter when he was a little kitten. Sadly, he was born mostly blind and very small (water-bottle-size at the age of 2). He needs medical attention and a loving home.

“When I was first told that he was blind, I was a bit worried. As a full-time student also working two jobs, I was afraid that I wouldn’t be able to provide Merlin with the attention he needed. As soon as I got to hold him, I think it was pretty obvious that he was perfect.”

According to Elliot: “He’s an affectionate cat that loves being acknowledged and held. He’s never destructive or petty, either. Because he was born blind, he really has no concept of fear and so he’ll attempt to jump off of pretty high places. He doesn’t hide or avoid people–he’ll run up to the door to meet us and climb all over guests sitting on the couch. His preferred place is on someone’s lap.”

Merlin met his parents at the shelter and knew he had found his forever home. The family is so happy for finding Merlin and they think that they owe it all to shelters like the Lynchburg Humane Society. 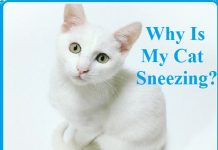 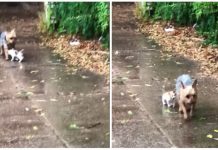 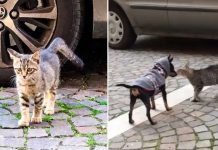 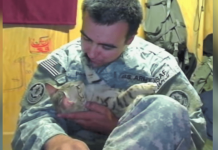 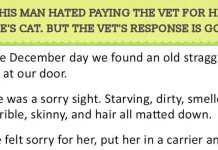 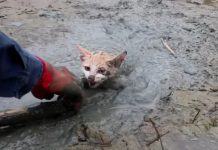 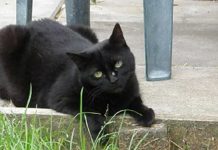