When you find yourself in a position of being vulnerable and unable to fight for yourself, as this sweet baby did, you need a helping hand and someone to stand up for you. Luckily, little Finn had his loyal dog by his side when he got into the hands of the cruel babysitter.

Benjamin and Hope Jordan hired this ‘nanny from the Hell’ when Finn was only 7 months old and believed she was the right person for the job.

As time passed by, however, they noticed how their dog named Killian started acting strange when around the babysitter. The sweet pup who never showed any signs of aggression would suddenly start growling at this woman.

Killian’s behavior was enough concern for the parents to be alerted that something more serious than just a dislike towards the nanny was in question. What Benjamin and Hope did was placing an iPhone under the sofa so that they could record what was going on in the house while they were away.

The chilling discovery left them overwhelmed. The mom described what was happening to her son as “a nightmare.” The recording revealed the little boy was constantly crying, sometimes for hours, because he was left all alone at his crib. The nanny could be heard screaming at him and cursing, but most concerning of all were all those slapping noises.

The cruel woman pleaded guilty and would be serving one to three years in prison for child abuse.

This story is alerting, concerning, and makes you wonder how good you know the people you are willing to leave your child with.

Take a look at the whole story in the video below. 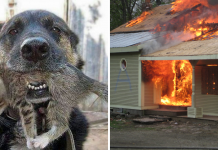