Tiny pup abandoned inside backpack in freezing cold. When our pets get injured or start developing worrisome symptoms, it’s a good idea to take them in to get checked by a veterinarian. Not everyone can afford to run to a pet specialist at a moment’s notice, but thankfully there are plenty of insurance and payment plans available now to make sure people can get their animals the help they need without putting themselves in an immediate financial rut.

Sometimes the care needed is so extensive that people just can’t go through with the costly procedures or they can’t afford the expensive medications. There are options, again, to help with these situations — some people even end up surrendering their pet to a shelter or rescue so that their critter will be able to get medical attention even if it means giving them up.

It’s a tough decision to make, but there are solutions people come up with that are just horrible. Stuffing a dog into a backpack and leaving it on the roadside is not a valid option.

But that’s what Burean Behrens found on Jan. 22 in Caldwell, Idaho. She stopped when she saw the backpack on the side of the road, expecting it to contain a kid’s school supplies.

“It was an awful site and I’m just glad I stopped, I thought maybe there was a library book or some identification,” she wrote on the West Valley Humane Society’s post. “I assumed the backpack was a child’s and just got left behind, so my original intent was to try to return it to the owner……. then it started moving!”

he grey and white dog looked to be a small mixed breed and was freezing cold. Behrens took it home and cleaned it up, but recognized that something was really wrong with the dog.

“…she was so caked in feces and soaking wet, after I bathed her I kept a couple towels around her and put her under my heating blanket with me,” she wrote. “Honestly she was covered almost the whole time, even when I handed her off to animal control I had her wrapped….she was dry but I sent a baby blanket with her.”

“Only time I really saw her unwrapped was when I sat her down to see if she could stand on her own after some food and water and being warmed up. But I was super concerned about what I thought was neurological issues going on that I really didn’t pay attention to her coat.”

“I think if she were stolen and her owner was still looking, they would have claimed her or left WVHS know by now…… especially with all the shares, attention, and news coverage. It’s sad, but my personal opinion had been from go, and is still, that her owners dumped her after her symptoms worsened.”

The humane society has a “finder first” policy, so if the dog recovers and is adoptable, Behrens has first dibs. Plenty of people who’ve seen the humane society’s post have offered to adopt the little dog, but Behrens cautioned them that this dog would need a lot of ongoing care.

Meanwhile, the shelter is looking for the culprit, hoping to bring some justice to the situation.

Share this Tiny pup abandoned story with your friends. 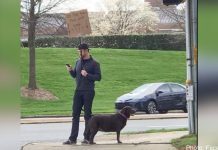