Being a truck driver means spending most of your days on the road. And if this isn’t tiring enough, winter and harsh weather conditions make the long driving tours even more difficult. A semi-truck driver named Peter Douglas from Winnipeg knows this all too well.

One cold and snowy day, he got stuck on highway 10 south of Brandon. Unable to have his vehicle moving, he simply decided to spend the night inside, hoping the weather would get clear in the morning. In the early hours of the next day, a loud knock on the truck’s window woke Douglas up.

An eighteen-year-old girl named Eileen Eagle Bears saw Douglas’ truck stuck in the snow after she and her mother watched the traffic cams during the night. This kind girl promised to go and check up on the driver in case he’s still there early in the morning. And that’s exactly what she did.

But she didn’t go alone. Her horse, Mr. Smudge made her company. Since Douglas’ truck was around 3 miles away from Eileen’s home, it took her around one hour getting to him.

“There was a lot of ice on the road from the rain that we had got and drifts were bad in a few places,” Eagle Bears told CBC News.

Douglas couldn’t really believe what he was seeing. His day started with a greeting and a cup of hot coffee and that’s exactly what he needed after spending the night in his cab.

“She had to walk that horse half a mile up that hill and half a mile down because it was so icy. Blew me away,” said Douglas to CTV News. “She said she saw me on the camera. Her and her family were watching.”

The girl told Douglas she would return with a hot meal in case he stays there during the day too.

She again did what she promised. Later that day, Eileen brought the man hot stew and potatoes along with a bottle of water.

“I thought he would be getting pretty hungry, and that’s not a good feeling, I just put on extra clothes and did what I promised I would,” Eagle Bears stated. What an amazing young woman!

Douglas spent 28 hours stuck in the snow after he was offered help and his truck was again back on the road. This man will never forget the kind gesture by that young lady. She proved him how there are still compassionate people out there. He still has her thermos and promised to get it back when he’s around the area again.

People took their time to praise Eileen for her kind deed.

“It is overwhelming. I had gotten back and my mom had posted just a post on Facebook.”

“And there was a few likes at the beginning, but we went back and there was just more and more, and it just totally blew up,” said the teen. That’s not hard to understand, because hers was an act of kindness in the cold that is warming hearts across the world. 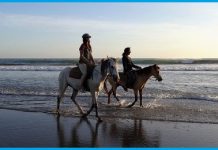 How to Keep Horses Calm During Travel