It’s hard to believe but it’s a common occurrence in Echo Lake Park in Fort Worth, Texas that anyone could abandon a pet in the middle of a park.  But when Judy Obregon saw it she thought…”It was just sitting there: a little blue pet house in the middle of the park.”

Being the founder of the animal rescue organization The Abandoned Ones (TAO), Judy Obregon has seen many terrible things.

In this particular park, it happens so often that Judy started taking daily walks to find any abandoned pets.

One day she stumbled upon a pet house, it didn’t appear to have any activity inside…

Even so, Obregon knew she had to make sure there wasn’t an animal in need of love and care.

She needed to be careful though.  It was a wooded area and it could be possible that a wild animal could have made the pet house his home.  Maybe even an angry momma raccoon!

She had to find out, she couldn’t just walk past.

She opened up the door and peered inside.  There were lots of blankets she cautiously pulled the blankets and she gasped at what was inside! Staring back at her were two eyeballs.

It was a tiny little dog!  Thank heaven it wasn’t a raccoon!

The blankets were wet and cold. There was no food or water in sight, either, so Obregon quickly freed the little pup. She didn’t hesitate one moment she knew he needed to be seen by a vet.

It was discovered that the puppy was only 10 months old and was suffering from Mange.

Obregon knew exactly what to name her.

“She named the little pup Najila, which is Arabic for “eyes that glisten.”

What a perfect name since that was the first thing she saw when she met her!

Najila spent her recovery time at Obregon’s home for a few weeks, and then they found a perfect foster home for this adorable little puppy.

Although she was sad to see her go, Obregon will never forget the first time she laid eyes on her eyes and the feeling she had when she discovered she was harmless.  It’s why the rescuer does what she does; she has a servants heart and loves animals.

I can’t even imagine stumbling upon an adorable puppy while I was out for my daily walk.  Would you stop and help?  Or would you walk past and not investigate? 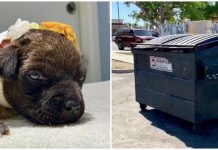 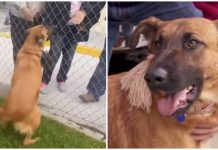