Wild animals aren’t strangers to the harsh ways of the natural world. They are instinctively smarter and stronger than we might think. Still, a baby is a baby: even a baby wild animal.

When two fishermen spotted three wild bears swimming in a freezing Russian lake, they cautiously watched, but felt the mother would protect her two cubs. However, what they witnessed next forced them to embark on a dangerous rescue mission instead…

Ruslan Lukanin and a friend were out fishing on Lake Vygozero, in the northwestern area of Russia, when they noticed something far out in the middle of the lake.

Lake Vygozero is a frigid body of water that all fisherman and nature-savvy lake goers treat very carefully. The water temperatures can drop as low as 4 degrees below zero.

The lake has over 500 islands teeming with various marine and wildlife inhabitants. Sometimes run-ins with larger predators, like brown bears, occur on some of the larger islands.

Due to the harsh environment, Ruslan was concerned when he saw an object floating in the lake. If it were a person, then they would be in grave danger.

But as the two fishermen got closer, they realized it was a mother brown bear with two cubs on her back swimming through the deep, swift current.

They kept their distance, as any human should when it comes to wild animals, and watched from afar. But what they saw next was quite alarming.

Known to risk their lives for the safety of their cubs, the two fishermen were shocked when they witnessed the mother bear willingly abandon her two cubs.

As the mother turned around and swam back to the nearest island, her cubs instantly began to tread water in an effort to stay afloat.

It was evident that the cubs weren’t strong swimmers. Ruslan and his friend knew they needed to take action if these cubs were going to survive.

Ruslan recalled, “It was dangerous of course. But they are living creatures. We couldn’t just look the other way.” After all, any animal would be grateful to have their life saved by a helping hand!

They quickly steered towards the drowning cubs, unsure how they were going to save them. They could see the fear in the small bear’s eyes.

As they reached the first cub, the baby bear instinctively knew they were there to help. He attempted to climb into the boat, but he was too weak.

One of the fishermen grabbed a fishing net and attempted to scoop up the bear to provide that extra help they needed.

The cub was a lot heavier than they imagined and it was very difficult to lift the bear into the boat, but finally, the cub found the extra strength it needed.

The second cub was even more exhausted. It didn’t have the strength to try and lift itself into the boat, and the net and men were simply not strong enough to lift the bear.

They had to think quickly. They noticed the bear was able to use its claws to hang onto the net, so they scooped the bear up and began to slowly drive the boat back to shore.

The fishermen made sure the cub was right beside the boat the whole time. Ruslan was relieved they were able to save the cubs, but the rescue wasn’t over.

How were they going to help the cubs get back to land? Mother bears can get aggressive when it comes to their babies, and although this mother seemingly abandoned her cubs, there was no way to know how she would react.

They headed towards the island they saw the mother bear swam back to and decided to leave them there so that she could reunite with her babies away from prying eyes.

The two fishermen helped the cubs off the boat and left them protected under some trees by the beach. They knew it was only a matter of time until their mother returned.

Ruslan and his friend left the lake heroes that day. Two very small bear cubs owe them their lives.

Share this baby bear rescue story with your friends below! 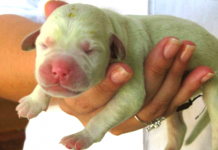 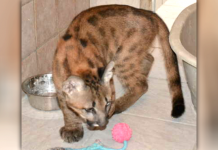 Adopted Kitten Developed Into Something Its Owner Never Expected 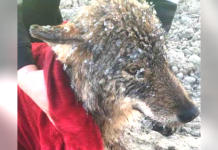 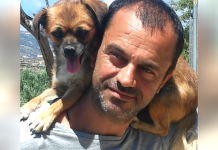 Man Pulls Puppies Out Of The Trash Every Day 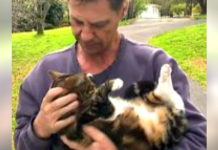 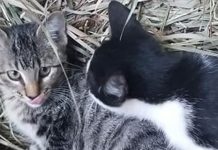 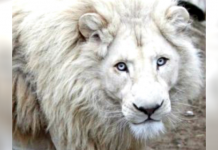 Trophy hunting Won’t Stop Trying To Get This White Lion