How could anyone ever keep their Dog Scared for years and then one day decide he/she was “too old”?  That’s exactly what happened at the Lancaster Animal Care Center in Los Angeles in August.  The owners dumped him off at the shelter and said he’s too old.

Choco is a 13-year-old Chihuahua mix. He definitely wasn’t a spring chicken, but he was still adorable.  The staff kept him on the medical watch where it is a lot more quiet and relaxing.  That is one of the hardest things for senior dogs when they come into the shelter.  It’s so loud and busy.  They just need a quiet place to rest.

The problem was in this section of the shelter no one would ever see Choco.  This made his chances of finding a new home very unlikely.

But when photographer Rita Earl showed up at the shelter one day to take pictures this was Choco’s big break.  Rita loved little Choco.

“He was one of four dogs who were in medical that day,” Earl Blackwell told The Dodo. “The thing that stood out to me about him was not only how quiet he was and how sweet he was, but he had very worried eyes.”

“When I asked the attendant what was medically wrong with him, they told me that he was brought in by his owners, and his owners stated that he was too old, and they didn’t want him anymore,” Earl Blackwell added. “So he didn’t come in with a broken bone or anything physically wrong with him. He was just too old for them, so they left him behind at the shelter, which is always very sad because … he’s in a strange place without his family that he’s known.”

This face looks very worried but rest assured that Choco loved the attention he was getting from Rita and the volunteers.

A photo and a couple of videos of dog scared or Choco were posted on Facebook, in the hopes of giving him some much-needed exposure.

Hillary Rosen, the founder of A Purposeful Rescue, rescued him from the shelter only a few short days later.

She renamed him Toast. Now the photographer is happy she went to the shelter that day.

“I met a lot of dogs that day, but when I came home that night, he stayed on my mind,” she said. “I was praying that he’d find somebody, and then this rescue group took him. It’s one of my favorite rescue groups — I love the work that they do … so for them to take him, it was extra joy for me.”

How happy does this story make you?  We love when dogs get a happy ending. 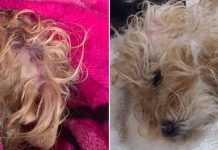