Look like a Skeleton dog which has been rescued. This abandoned and neglected skeleton of a dog is named Augustus. He was found completely emaciated and wondering around the streets in Chicago, no doubt looking for anything that resembled food. 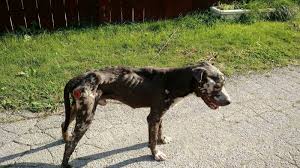 He had a large sore over his hip bone, you could see every rib and vertebrae he had, and his fur remained in patched around his body. But thanks to the loving staff members of the Trio Animal Foundation (TAF), based out of Chicago, Augustus received the help he needed to persevere and give life a fighting chance.

Although he had no food, home, or companion, he had spirit and that’s just what might have saved this young boy’s life.  You simply won’t believe Augustus’ incredible dog transformation. Just wait until you see what Augustus looks like now!