Helping a lost abandoned Great Pyrenees or dog find her way back home can be as simple as reading her tags. Then, of course, it’s just a matter of earning the dog’s trust and coaxing her into your car! But sadly, not all lost animals can be returned so smoothly.

When a Kentucky woman saw a dog in a bad spot, she and her family did what they’d done so many times with stray animals before: offered help. But what should’ve been a simple pick-up-and-return mission turned into a heartbreaking predicament that forced her to make some tough decisions…

Melissa Ringstaff, below center, and her family have a motto: “We can’t save the world, but we can do something about the one in front of us.” And when it comes to animals, that’s truly the motto they live by.

The motto regularly encouraged the family to help animals. They often scooped up lost animals wandering Harlan, Kentucky, fed them and found their homes. Such was the case with a certain Great Pyrenees…

Early on a Saturday morning, the Ringstaff family cruised down the highway, a 2-hour drive ahead. But in the opposite lane, they noticed a great, hulking dog, below, lying still in the road. Cars swerved to avoid him.

The Ringstaffs were concerned that the dog had been hit by a car. Melissa’s husband Mykal, a pastor, flipped on the car’s hazards lights and pulled the truck over. They got out of the vehicle to inspect the canine.

But as soon as Melissa and her gang stepped into the road the dog stood up and walked over to them, curiously showing no sign of injury. It was then Melissa saw the heartbreaking reason the dog was staying so still…

Off in the ditch lining the highway, another dog had been hit by a car. Tragically, he didn’t live to tell the tale. By the looks of it, the dog in the road had been guarding his fallen friend. The sight “broke my heart,” Melissa wrote.

The Ringstaffs tried luring the dog into their truck, but he refused to leave his friend behind. Heartbroken, the family left the stubborn pooch for the moment (they were, after all, on a day trip). But ten hours later, they returned.

The dog hadn’t left, though he’d moved out of the road. So, committed to saving the world in front of them, the Ringstaffs hoisted the massive dog into their truck. Like so many other lost dogs, they’d find his home, too.

But as the Ringstaffs drove with the dog in their truck, searching for the collarless dog’s home, local after local told the same story—one as tragic as the lost dog’s situation.

Those dogs, the locals explained, belonged to someone who moved away. They left the dogs behind to fend for themselves, leading to one’s demise. The abandoned and lonely Great Pyrenees had no home to return to.

Worse, the dogs had apparently been living on the side of the highway for a couple of days. So, hearts broken once more, the animal-loving Melissa and her family knew what they had to do: make this dog’s world a better place.

The Ringstaffs brought the dog home, fed him, bathed him, and gave him a haircut. When night fell, she led him to a brand new kennel. But the dog didn’t sleep.

Instead, he broke from the kennel in the dead of night and disappeared from the Ringstaff home. The second Melissa spotted the kennel with a now-broken door, the family went out searching for him. It should’ve been easy. It’s not like the big dog was in disguise…

All day, the Ringstaffs searched, asking everyone they passed if they’d seen an enormous dog teetering along. They drove to the Humane Society and police stations. They couldn’t find the Great Pyrenees anywhere.

In fact, the Ringstaffs spent three days looking for the dog, putting over 100 miles on their car driving around the small Kentucky town. Finally, they spotted the pooch.

Just a few miles from the Ringstaff home, the pooch sat on a stranger’s porch, happy to see Melissa and her kids! The next day, Melissa bought him dog tags—with his new name.

At first inspired by the 2009 film Hachi: A Dog’s Tale, below, they called him Hachi. Like the dog in the film Melissa wrote, “we’d found him loyally staying with his buddy who died.” But they ultimately chose a happier name.

“In the end,” Melissa wrote, “we named him Tucker.” Though simple, the name somehow perfectly fit the dog’s personality. “He’s incredibly sweet, very gentle, and we’ve yet to hear him bark.” He’s Tucker. And he’s a Ringstaff.

Yep, while Tucker faced a tragedy that’d mentally sideline a human being for a couple years, the great big dog kept his spirits up. As Melissa wrote, “there was something about this dog that really made us fall in love with him.”

When you watch the video below, you’ll see more of Tucker’s amazing journey from a depressed dog who couldn’t leave the highway to a happy dog part of a loving family. Just look at his goofy grin at the end!

While maybe it’s true the Ringstaffs can’t save the world, they’re definitely taking a step in a positive direction with all the love they’re showing animals.

Share this abandoned Great Pyrenees with your online friends.

25 interesting dog facts that you may not know 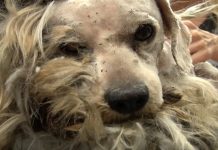 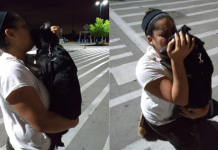 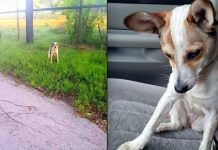