When abandoned dog Brindle was released from his shelter cage and taken home by a soldier called JD Aument he couldn’t have been more overjoyed.

The two became inseparable and Brindle couldn’t have been happier in his new forever home – that was until his dad JD, who is a firefighter in the Army Reserves, was deployed.

Brindle thought he’d been abandoned and although he still had JD’s wife Rachel, he became very depressed.

“He’s so sad without him here,” JD’s wife Rachel Marie Aument told The Dodo. “He loves me, don’t get me wrong, but I’m not his person.

“He has days where he just sits at the front window, crying,” she added.

When Rachel told her husband how sad their dog was without him, JD decided to send something back that changed Brindle’s mood and let him know that he hadn’t been abandoned by the soldier who saved him.

JD sent home an unwashed shirt to give Brindle something of him and help him feel his presence again. When Rachel opened the gift from JD and gave it to Brindle, his mood immediately changed.

“He immediately knew that it was JD’s shirt. There was no doubt about it,” Rachel said. “I was crying so hard while recording his reaction.

“He carried [the shirt] up to bed with him after the video and slept with it the rest of the day.”

Brindle carried the shirt with him everywhere, so Rachel decided to make life easier on her precious hound and dressed him in her husband’s shirt.

“I think he felt a little abandoned when JD left and the shirt helped reassure him that Dad still loves him and is coming back,” Rachel added.

Thankfully Brindle didn’t have to wait long for his owner to return but at least the shirt offered some comfort in the meantime.

Please share Brindle and JD’s heartwarming tale with your friends and family. 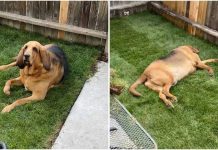